Living in Thailand: Observations on life in Bangkok.

Before we started living in Thailand, and living in Bangkok, we obviously did a lot of research and thinking about the move.

Having been living in Thailand a little while now, we have some idea of the key differences between Bangkok and London. So in no particular order, here are a few observations about daily life in Bangkok, and what you can expect as an expat. Or immigrant, as the correct term. Or farang, as you will be called here every day.

Cost of living in Bangkok

I read a few articles before arriving that said living in Bangkok was as expensive as living in London. This is, to coin a phrase, bollocks. Although it has definitely become more expensive to live in Thailand for Brits as our magnificent politicians gently shaft the UK into oblivion, Bangkok is still laughably cheap.

Last night, we had dinner from a favourite joint delivered from 4 miles away by a man on a motorbike. Total cost for two people including delivery, $4.

A half hour taxi will cost around $3. I can buy perfectly decent work clothes for $5 a shirt. We bought a vacuum cleaner for $15 and a food processor with the power of a thousand suns for $20.

Rent is comparable to our London mortgage, but while in the UK that got us a one bed the size of a shoe, in Bangkok we have a two bed Hilton on the 28th floor, with panoramic views of the surrounding smog. Also seven swimming pools and lift music that sounds like it’s from Gladiator.

There are notable exceptions to a cheap cost of living. If you want to have a totally western lifestyle it will cost more. Specifically, imports are very expensive in Thailand. So if you want wine, steak and Nike trainers, you’ll pay comparable or higher prices to London. Presumably though, if you want a totally western lifestyle, you could just live in the west and be done with it. To give some context, a bottle of wine that tastes faintly of battery acid costs about $15. Also chocolate is expensive, which is a struggle.
Living in Thailand outside of Bangkok should be cheaper still. Chocolate will not be. Sadly.

All in all, if your cost of living in Bangkok is over 50% of what it would be in a European city, you’re probably doing it wrong. Or you’re blowing everything on fancy weekends away, in which case you’re doing it right. Well done you.

The daily grind in Bangkok is actually fairly similar to London. It’s crowded and busy at rush hour and the transport system is woefully overloaded. The BTS Skytrain is effectively a large sardine can, and on board you will receive a daily free massage from the heads, limbs, bags and assorted accoutrements of your fellow passengers.

The heat is a big part of life when living in Thailand, which sounds silly – it’s Thailand – but it genuinely is a shock. If you bring any more than one jumpers you’ve done it wrong. Very often I have to wear a jumper indoors because the aircon is chilly, only to take it off to go outside. As I type this it is 7pm and 34 degrees in the apartment. You do get used to it.

Working hours are a bit longer than in the UK. Most of my colleagues won’t leave until after 6 on an average day. That said, they generally start later and the lunch hour is sacred. This is understandable with excellent cheap eats on every corner.

As a result of the unrelenting heat, living in Bangkok involves very little outside space. As such, the old running and cycling routine from back in the UK is very much off the table. Fitness is more about gyms, climbing and Muay Thai kickboxing here, which as a gym phobe and notorious wimp is a challenge for me.

I have actually taken up Muay Thai which is going to make for a hilarious future post. Or a trip to the hospital. Or both.

Some level of fitness is necessary because you’ll be doing a lot of eating. The wealth of great food for almost no money is mind-boggling. Home cooking for most Thai people we know is an alien concept. They just eat out or get takeaway every meal because it’s cheap and delicious.

Cooking with Poo: a magnificent Thai cooking class in Bangkok 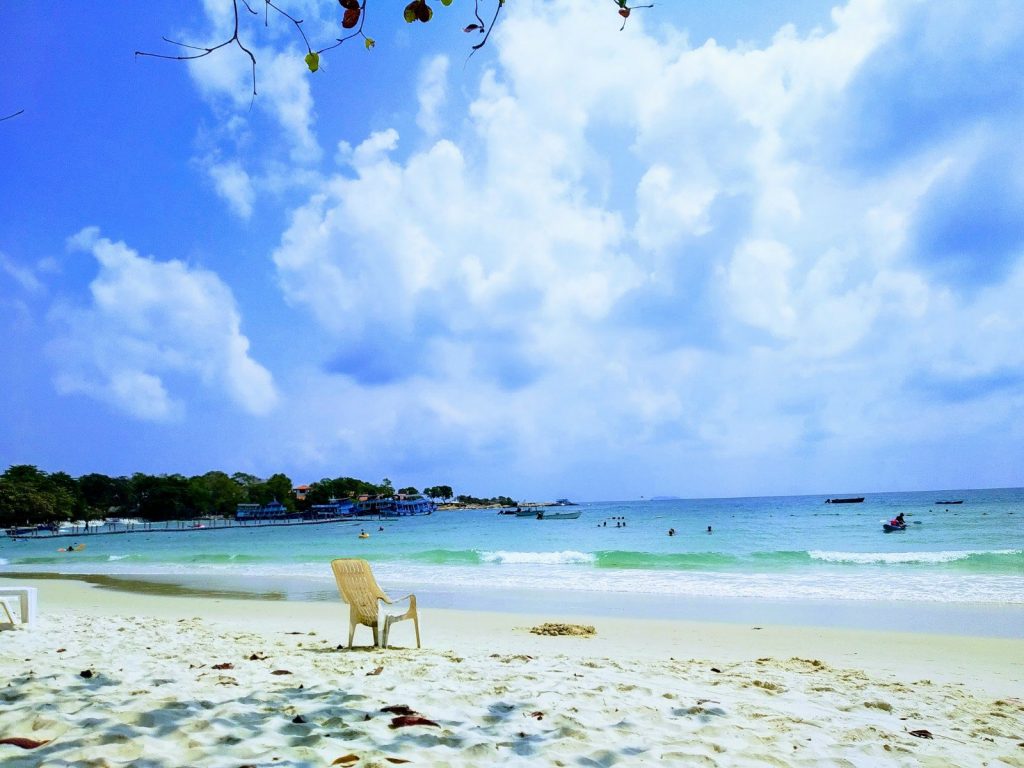 Thai people are very friendly by and large, but it really helps if you can speak a bit of Thai when living in Thailand. Who’d have thought? It’s not an easy language by any means, but mastering a few phrases is simple and generally evokes a better reaction than speaking loudly and slowly in English. Frankie has a good grasp of Thai having done a course and studied. She can speak and be understood. I have one single hour lesson a week and then eavesdrop on my Thai buddies. I can order food and swear at people.

It’s been easy to make friends at work, but meeting other farangs requires a bit of work. Thankfully Frankie is a social bean and has made pals through language schools and generally talking to other humans.

I work much better in print than person, so were I alone I might be a bit cut off, aside from constantly texting friends back in Europe. You do have to work at meeting people here. Especially if you’re younger, as the classic working ‘expat’ group here is family with kids who meet up on the school run.

We feel very physically safe in Bangkok. Even living a bit out of the way, there are never any problems or dodgy situations. I actually feel a lot comfier here than in London. You do see reports of foreigners getting into difficulty in Bangkok, but that’s not a huge surprise at 4am on Soi Cowboy. If you’re vaguely sensible everything is fine.

I had read somewhere about the dangers of feral dogs in Bangkok. There are plenty of strays, called soi dogs, but they’re hardly feral. They are asleep 90% of the time, and the other 10% they hang out with the local taxi drivers, strut around wagging their tails, and get fed. They are among the most docile hounds I’ve encountered. Best of all, many of them have bow ties or scarves, adding a frisson of class. Last week I saw a woman go ballistic at a soi dog who took one bite of the food she offered it before trotting nonchalantly away to urinate on a bike. What’s not to love?

The main threats come on wheels. Crossing the road is an adrenaline rush here. Motorbikes and cars will fly at you from all directions, pedestrian crossing be damned. Traffic lights are strictly for decoration purposes. This is a theme of South East Asia. In Ho Chi Minh City, our guide suggested we follow old women across the road – as they are old they have clearly survived for a long time and know how to do it.

I’m not sure if he was joking.

Living in Thailand is not all sunshine and roses/noodles. Being far away from friends and family is tough, although Whatsapp calls are a godsend. Many things are pretty inefficient. I spent 45 minutes in the bank today just to make a transfer. Almost every official thing requires about four copies of your passport and paper copies of all other documents. Visas can be tricky – we were lucky that our company helped out, but it still took several months to get everything sorted.

The ongoing air pollution is a worry. It comes and goes but there’s nothing fun about wearing a face mask all day.

Traffic is also genuinely maddening most of the time.

One of the best things about living in Thailand – and in Bangkok certainly – is the ability to leave. Thailand is perfectly placed in South East AsiaWhilst it’s a great base and place to live, there are far more beautiful places in the surrounding area that are a one hour flight or two hour drive.

We already went to Ho Chi Minh and Kanchanaburi and this weekend we’ll head to Koh Samet. Flights are ridiculously cheap, as are trains and buses. It’s perfectly possible to leave on Friday evening, have a couple of days on the beach, and be back at work fresh on Monday morning. Even within Bangkok there are quiet retreats like Bang Krachao or the old city of Ayutthaya just a short train journey away.

Living in Thailand has been great so far. The people, lifestyle, food and climate make it an easy place to live. It’s by no means perfect, but nowhere is, and we are very lucky to live here.

In a few short months living in Bangkok has gone from feeling alien to feeling like home. The wealth of things to do and explore around Thailand and South East Asia help make Thailand and Bangkok a great place to live. We can recommend it to anyone thinking of doing something similar. We thought about this for a long time; in hindsight there was nothing at all to worry about.

Obviously if you do come – bring wine. And chocolate. And bring some for us…