At face value, speaking Thai should be pretty straightforward. Thai in many ways is a very simple language, doing away with a lot of the elements that make some European tongues complex.

As a speaker of incredibly basic GCSE French and dabbler in others, I assumed it would be a doddle to pick up Thai. How hard can it be?

Pretty hard, it turns out! Who’d have guessed? We’ve been here around 4 months and I can only hold a very, very basic conversation. Almost exclusively about food or going to the toilet. I should add that I’m the dunce in this situation. Frankie has properly committed to learning, going on courses and studying, while I’m relying on a single hour per week followed by incessantly bugging my colleagues about how to say things. Frankie gets complimented on her Thai regularly and sincerely. I get complimented in the way you would compliment a dog for not crapping indoors.

Overall though it’s a fun exercise to start speaking Thai. As many foreigners just shy away completely, Thai people are almost always happy (and amused) to hear you speaking Thai. Even if you sound crazy, which I invariably do. Here are some of the most fun/frustrating/bonkers things we’ve come across thus far.

I mean this in the literal sense. There are no tenses in Thai, nor are there any conjugations. So ‘bai’, ‘to go’, works whether it’s past, present or future. You, me, he, she or it. A quick addition like ‘leeo’ (already) indicates past or future. This makes Thai straightforward in that if you know the verb, you know all the ways to say it.

In theory, there should be a subject, like I or you or they to make it clear who is going. In practice when speaking Thai, nobody bothers with such frippery. Who cares if it’s me, you, us or the cat going? What possible confusion could it cause if I walk up to a colleague and simultaneously say: ‘I am going, you should go, he is going, let’s go’?

None whatsoever. All perfectly clear.

The lack of indicators makes speaking Thai incredibly contextual. It’s difficult to get your head around but nobody bats an eyelid here. If you do have the temerity to declare who or what you’re talking about, be prepared for mockery.

No sleeping at the back!

The major stumbling block when speaking Thai is tone. Like many Asian languages, Thai is tonal, so the emphasis of how a word is spoken is supremely important. There are five exciting tones to learn when speaking Thai: mid, low and high are flat (ish), then falling and rising start at one end and end at the other.

For us foreigners this is probably the biggest challenge and also source of hilarity. In English we throw tones around with reckless abandon. Yes means yes no matter how you get from the Y to the S. Speaking Thai, not so much. In Thai, the sentence ‘mai mai mai mai, mai?’ means ‘new wood does not burn, does it?’ Admittedly it’s rarely used.

When we arrived we just had no ear for the tones, but it does come after a while. Saying them is quite another matter and the ramifications can be, unexpected.

Let’s take ‘maa’. In a flat tone, ‘maa’ means ‘come’. So you can beckon somebody with ‘maa’. With a rising tone, it means dog. So you can go from asking somebody to come over to barking a mortal insult fairly quickly.

Another example is ‘muay,’ as in muay thai. With a rising tone, you’re talking about boxing. With a flat tone, more like ‘moy’, it means pubes.

Actual sounds are equally important. For example, if you want something a little bit spicy, you can say ‘ped nid noi’. If you don’t emphasise the ‘p’ sound in ped, you actually end up asking for a little bit of duck. 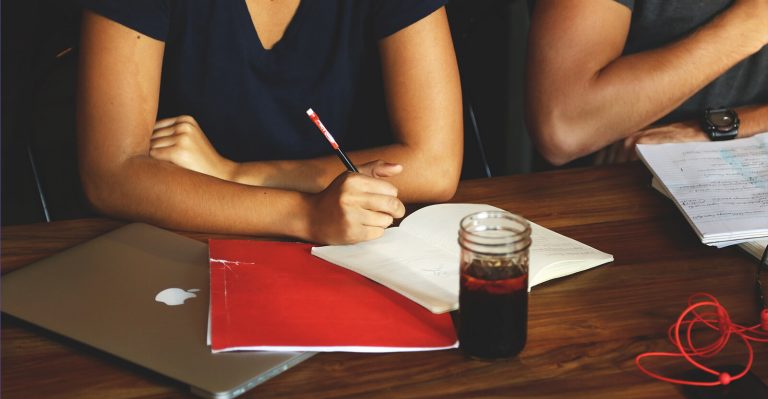 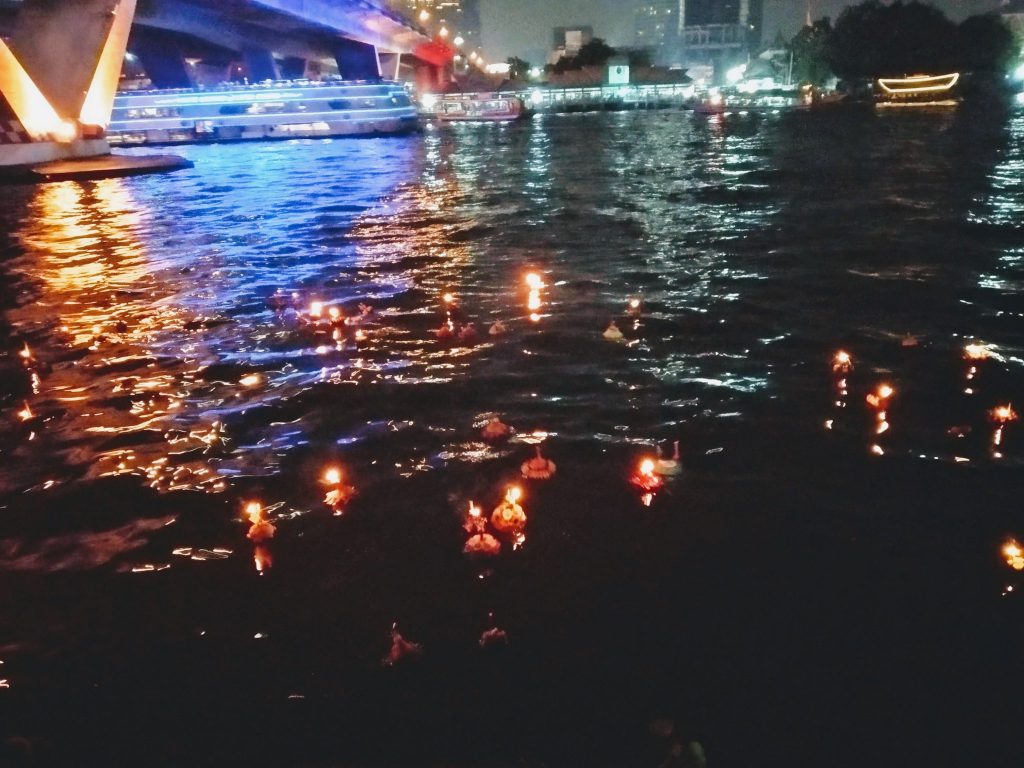 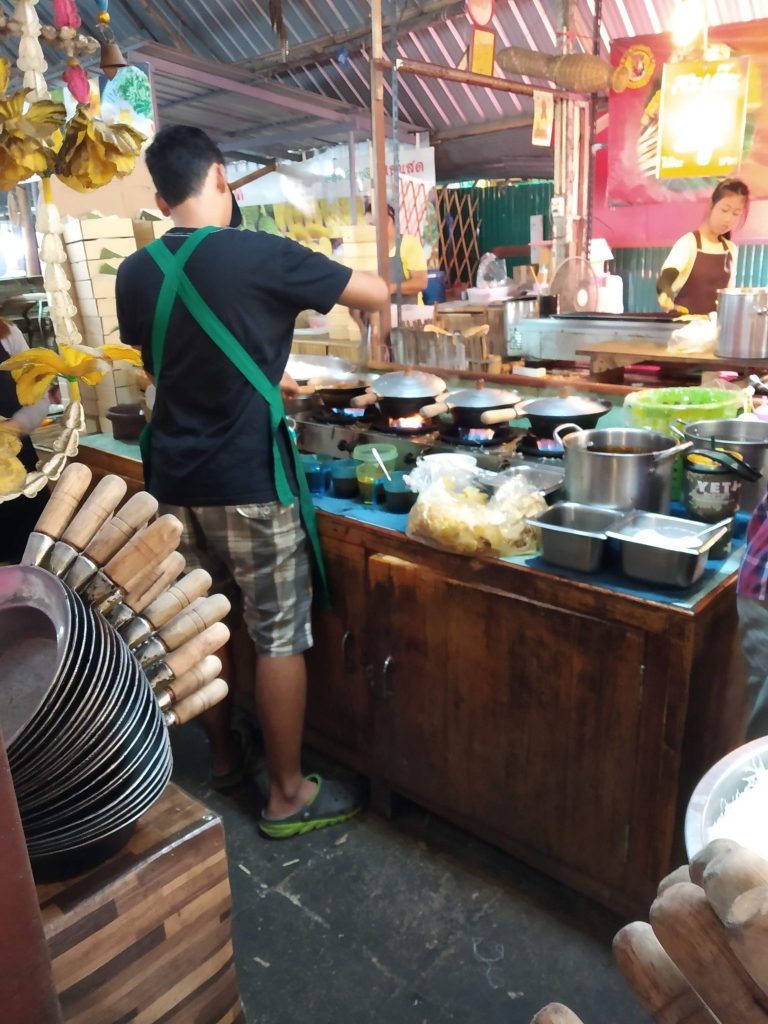 Lat Mayom – food and fun at a Bangkok floating market

The letter ‘R’ is common in Thai words and rare in speaking Thai. So we have ‘aroi’ (tasty), ‘arai’ (what), ‘rawn’ (hot). Apparently in ‘proper’ Thai, the ‘r’ rolls a lot. Given that’s a faff to achieve, Thai people don’t bother and instead, unfathomably, swap it for an ‘L’ sound. So arai, aroi, rawn, become alai, aloi, lawn. It also means that we live at the Liver rather than the River.

A related an endlessly funny quirk of this is that the Thai people I know cannot really tell between an L and an R, much like I struggle to tell tones. So according to Thai friends there is either an election or an erection happening this March. It never gets old.

How to start speaking Thai

Ultimately, although speaking Thai is tough, it’s achievable. If you’re in Bangkok, it’s also really easy to do. I have some private tuition and any quick google will help you find a teacher. Frankie goes to Duke language school in Asok and her Thai has become cracking in a very short time.

Practicing and making mistakes is also a big part of the game. If you are prepared to sound a bit silly, you can happily converse in Thai with Thai people and they’ll correct you in real time.

For reading and writing, I have mainly been learning through road signs (seriously) and menus where the English is written next to the Thai. I know about half the letters now as well as most of the vowels. I treat it like a spot the difference. An excellent resource is Youtube and I learnt the vowels from Stu Jay Raj who has a very effective system for memorising them.

Mainly though it’s about trying hard, making a fool of yourself and being prepared to speak utter gibberish much of the time.

So in many ways, learning and speaking Thai is just like normal life.