Being an absolutely useless planner of romance on almost every level, I was delighted to find that our anniversary this year coincided with the Thai festival of Loy Krathong.

The long and short of Loy/Loi Krathong, which falls on the full moon of the 12th lunar month (usually sometime in November) is that people gather by rivers, lakes, hotel swimming pools and presumably any water source larger than a sink, in order to float small, candlelit decorative contraptions. I have no idea if Loy Krathong has anything to do with romance. Colleagues each gave convincing and conflicting stories. It could be a wish for happiness for couples (definitely the line I used). It could also be a night to shake off the previous year. Or it could be in honour of a water goddess, or, my personal favourite, a general celebration of agriculture.

Ultimately, meaning aside, it’s a very popular event in Bangkok. So popular in fact that the usually busy-but-civilised BTS system descends into total chaos as locals, expats and tourists alike flood towards the river.

6 full trains later we both managed to fight and claw our way onboard and head for the river at Saphan Taksin, before embarking on a similarly mortal battle to get out at the other side.

Stepping down onto the riverside, traders, food sellers and musicians were all doing a roaring trade. The main item on offer is the eponymous krathong, starting at a thrifty 40 Baht (£1) for the thrifty casanova. They come in different materials – most are made of foliage, for want of a better word, but others are made of a dense bread  which have the dual benefits of degrading very quickly in the water and providing a hearty meal for aquatic wildlife. Ones made of sliced white loaf aren’t quite as visually appealing it has to be said. Until recently styrofoam krathongs were in action but these have been banned in Bangkok at least.

The classic krathong is a disc of banana tree trunk, wrapped in banana leaves into a sort of crown, and then filled with flowers, candles and incense sticks. Frankie, being handy at crafts, had made one at the hotel. Ta da: 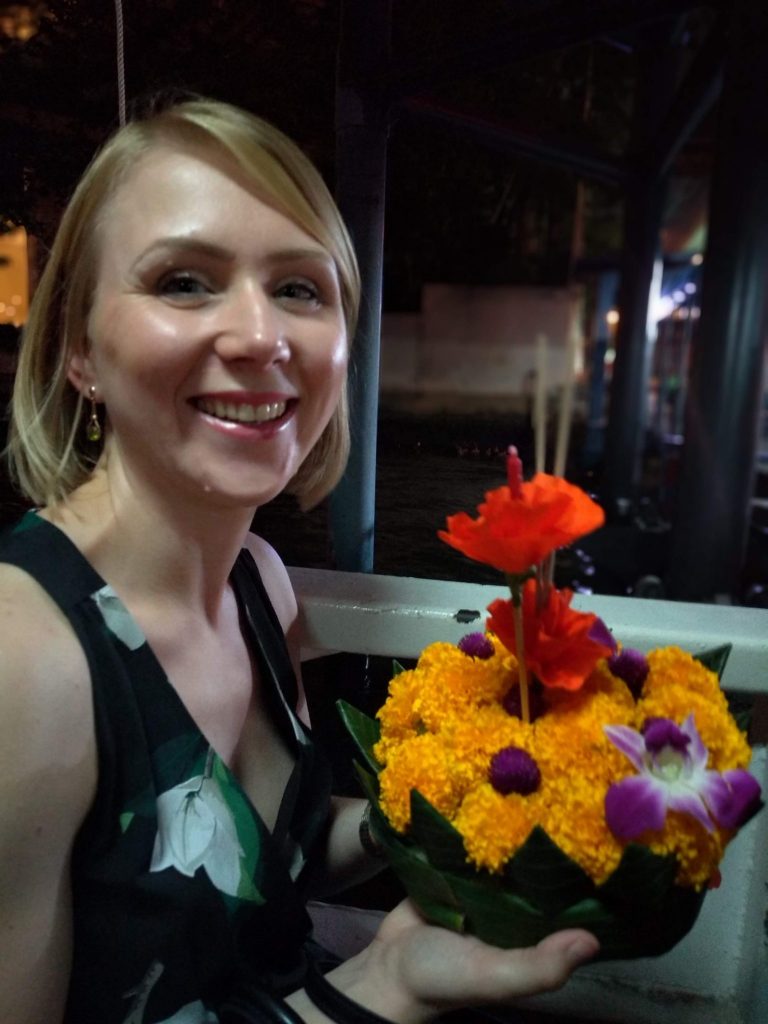 There are plenty of places to float krathongs at the riverside. People are on hand with baskets on sticks to lower your freshly lit krathongs into the water. That said, it’s not wildly romantic to drop your krathong in at a heaving pier surrounded by people with loudspeakers herding hordes of people on to boats. We hopped across the river on the 5 baht ferry and dropped ours in at the small park under Taksin Bridge, which was much more sedate and pleasant.

An interesting quirk of the krathong is the tradition of putting money into them before launching. We splashed out 10 baht to curry favour for the next 12 months. This also leads to as many people with baskets on sticks fishing krathongs out of the water as lowering them in, and fair play to them. The risk for the money fishermen is that aside form money, the other traditional krathong fillings are hair and nail clippings.

It is a lovely event altogether, although it does get incredibly crowded all around the river. It’s also advisable to book any riverside restaurant or bar far in advance if you want a good range of options. Eat Sight Story is supposed to be good, and the Three Sixty Lounge and rooftop bar at the Hilton would be a classy drinking spot with a great view if you could get in.

We ate at Never Ending Summer in Thonburi, by the Jam Factory, which was a lucky (if expensive by Bangkok standards) break. It wasn’t quite at the riverside but was only a few steps away, and they gave us a bonus krathong to float afterwards. The bar area at the riverside was also not busy and had a great view so a good choice for a drink or two.

One of the highlights of the evening is the fireworks along the river, kicking off at 10pm. The stretch around Saphan Taksin is littered with 5 star hotels and the brand new Icon Siam mall. Each of them has to put on a show for their clientele, which results in competitive fireworks. The prime viewing spot is on Saphan Taksin itself: 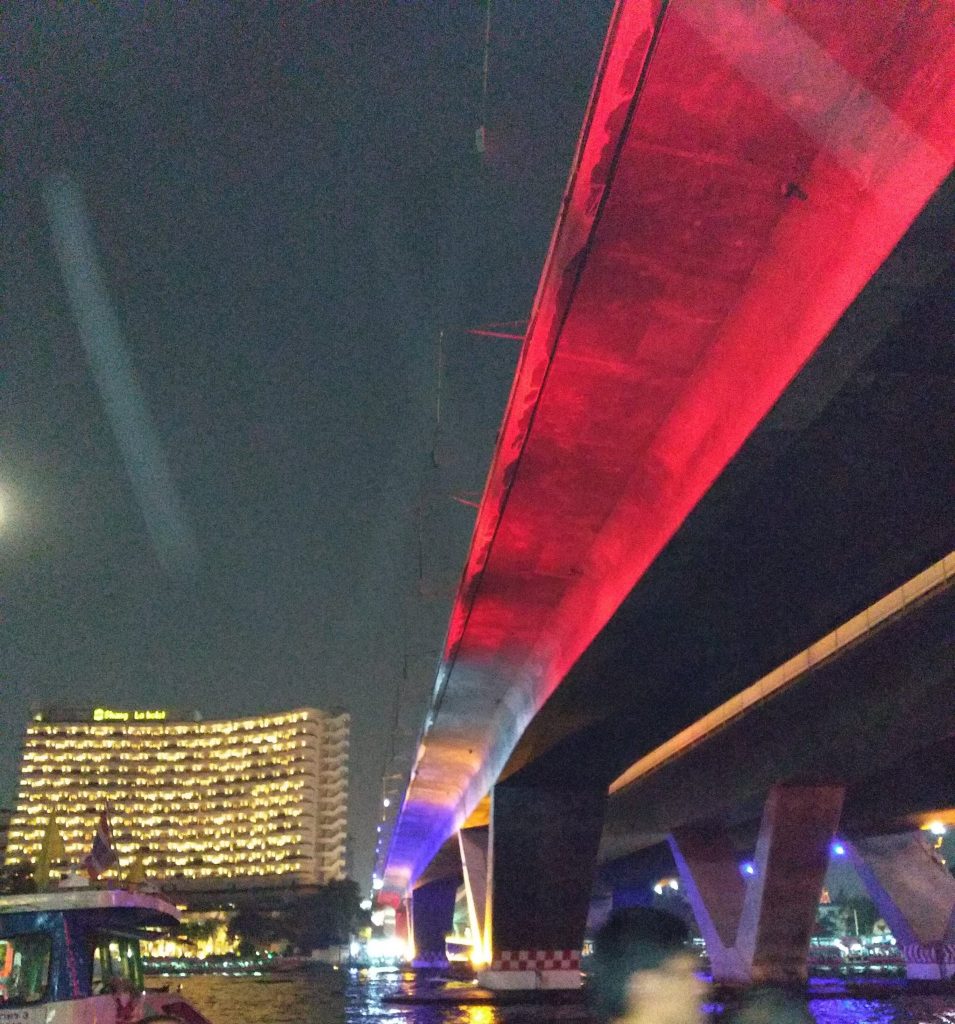 We couldn’t stay until the end, but even a couple of miles away we could see, hear and in some cases feel them, as each swanky establishment tried to outdo each other in a brightly coloured war. Someone who had a prime view described the ending as a curtain of white fire in the sky, which sounds like something worth sticking around for.

In summary – if you can overcome the crowds then Loy Krathong makes for a great night in Bangkok. With some prior planning you can create an unmissable evening on this special night in the Thai calendar.